Also, all bonus fields in long format are optional, apart from type. There is no need to ever provide sourceID or sourcetype, it’d be easier to assign them automatically.

Any progress on artifact support? This should be easy feature I believe, most of things needed are already here.

In the following weeks I’d like to move all ratifact-related info (description, graphics) to CArtifact class and polish reading them from config, removing redundant info.

I won’t work on VCMI for a few more weeks. When I come back I’ll probably focus on finishing campaign support as it’s almost done and quite important.

I was going to handle cutom graphics for artifacts, but it seems we the issue is same as for creature portraits. We need mechanism to access frames both from defs and free images (URI).
I’m not going to do same workaround as with creatures, but wait for Ivan to do the job… someday

Such mechanism was started in animRewrite branch but it is far from finished. So I still would suggest same workaround as for creatures - it is unlikely that we’ll run out of id’s before def URI system will be finished.

Perhaps I’ll continue work on it but definitely not this year - first I want to finish new towns and get rid from defHandler where possible (blocks both animRewrite branch as well as new content support).

That’s ok, take your time.
But I think that adding new creatures / artifacts should be completely automatic before we ask people to create independent mods for them in next release. Lack of compatibility between mods or backwards can kill all the modding before it starts off.

Completely agree with your post. But manual indexes are much better than no new content support at all. In worst case this will give some incorrect icons which can be fixed easily.

Lack of compatibility between mods or backwards can kill all the modding before it starts off.

That can be avoided by:

Some thoughts about art format: (as on wiki)

EDIT:
It looks that CArtPlace would need some changes to make creature-like icons work - it should use CAnimImage instead of blitAt() method. Drag-and-drop cursor won’t work as it either.
Send me test mod when loading is ready - I’ll fix that.

The mod seems to be correctly recognized by game already. However, game crashes at map start at the moment - serializer issues. I don’t have an idea for it right now.

Either way, iconIndex needs to be handled. Take a look.
witchking-arts.rar (4.15 KB)

Regarding package:
json with small 44px icons should be renamed to “artifact” - just like H3 .def with artifact icons
big icon is not used anywhere right now - right now there is no easy way to add it.

Regarding my commit - it made one quite old problem very notable. As result - hero window is quite slow to open at the moment. Will fix this soon - need to find some nice way to get rid of the delay.

Looks like map launched, but crashes at missing def. I suppose it’s the def of an artifact.

Now question: can we make adventure map def from artifact image, or it has to be separate file?

Added support for def, but seemingly it does not work. Not sure why, tried to follow exact structure of Cove creatures.

Ahh, so path is a part of artifact property. Tricky, not sure if that’s desired solution.

Theoretically it is possible to make most of/all of specified files paths completely optional and generate them by the game.

But this would need to decide how directory structure of mods will look like. For example aritfacts map images can be placed at

(IMO latest path is the best one)

I’d rather finish animRewrite first (to get rid of imageIndex’es) and wait for several VCMI-based mods to appear to see what is needed for them, what modders think about filesystem, etc.

Not sure if background has wrong color, or is not processed by engine? 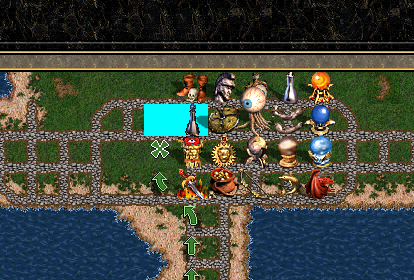 Not sure if background has wrong color, or is not processed by engine?

Def Preview (from era) seems does not recognize transparent color too.