Hello,
we are proudly releasing VCMI 0.93. Fulfilling numerous requests, with this release VCMI supports pure SoD installation. WoG/ERA is not required anymore, though remains and will remain supported.
There are also other numerous improvements to the mod system. Because of that the mods from 0.92 and 0.93 are not compatible. The manual on updating mods to 0.93 build is published on project wiki.

Modding system in VCMI is already quite powerful. Please visit Mod list to get the mods, like new towns, artifacts, main menu screen.

For the bugreports that we resolved in this release, please check the bugtracker changelog.

Check items implementation status for the full information about which spells, artifacts and campaign features are supported.

Installation:
Extract the package into your main Heroes folder. If you have older version of VCMI, delete it first.
VCMI works with SoD, WoG 3.58f and ERA installations. We recommend using English version, though VCMI should also work with other language versions. If you want to make your H3 installation English, extract this package into Data/ subfolder.

Save format has been changed, savegames from previous versions won’t work with 0.93.

Acknowledgements:
Many thanks for all testers and developers who contributed to this build.

For the general information about our project look here. Our project isn’t really playable now, but it gives you an idea of progress we have made so far. We’re hoping that you’ll like it.

For bug reports, we have deployed separate bugtracker. Please report bugs using this form. Check this page for list of known bugs and details.

We hope you’ll help us develop the project - details are available here. VCMI is an open source project licensed on GNU GPL 2.0 or higher. Our SVN repository with all the sources is available here.
You can look for help in building and developing VCMI sources in the development board.

I suppose yes (although this should be moved to thread like “Modding faq”). But you’ll need to add such ability to every Inferno creature separately - I don’t think that you can add ability to whole faction right now.

I think I’ll try to make such mod to have example on how to add abilities to H3 creatures.

Example mod that makes demons immune to damaging fire spells (actually set of multiple changes including this one)
dl.dropboxusercontent.com/u/223 … aks.tar.gz

What if remove SHOOTER from magog and then add SPELLCASTER (fireball)?

@Warmonger: Can you update the master post on your VCMI thread on CH with the new release?

EDIT: Oops. Already done but I missed it, as no new post was bumping the thread. Sorry. And thanks! 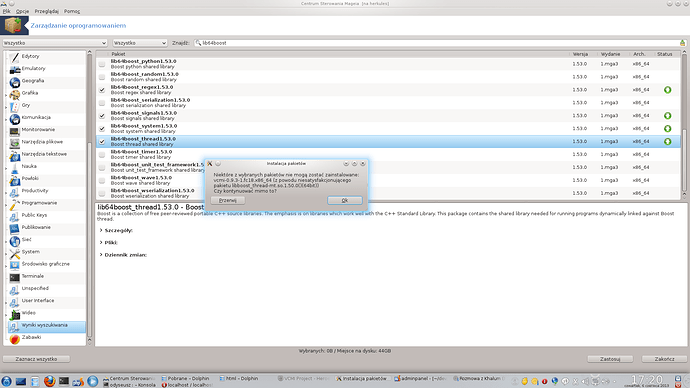 Do you have a 32bit or 64 bit operating system? What’s the name of your OS including version? Did you switch the OS since the last VCMI version?

Thanks, uploaded and added link to the first post.

Do you have a 32bit or 64 bit operating system? What’s the name of your OS including version? Did you switch the OS since the last VCMI version?

Sorry, I can’t help you. My RPM packages are built for the Fedora OS. There is currently no maintainer for Mageia OS.

If there is a greater interest in VCMI for Mageia I could cross-compile a version for it, but not the next four, five weeks

Perhaps you want to try it to compile it by yourself and provide packages for Mageia:)

How do you get the WoG features to work? Even with the WoG files installed and Commanders as “true” in defaultMods.json, I haven’t been able to get Commanders to work - Necropolis heroes get a Power Lich instead of a Commander, not sure about the other towns. This is even without other mods.

If you have Power lich as commander this means that WoG is not loaded at all.

If you have both of these and still don’t have wog features then this may be bug.