After a few months of development, it’s time to think about release. I hope to issue 0.85 build on 1 June, which is less than week from now. However if there will be found serious regressions that I’m unable to resolve quickly, release will be postponed.

If you havy any uncommited significant changes please commit them ASAP, I’ll probably post a next dev build within a few days.

Unfortunately both me and Tow Dragon were quite busy, moreover most of our time spent on VCMI went into ERM interpreter project that won’t be usable for players for a long time. So the progress is not great, however we have a few new things worth of attention.

Warmonger implemented stack experience system and new creature window. Experience system should be fully functional (including exp adjusting when merging/splitting stacks), though not all creature abilities gained from exp are supported. New creature window can be used to check unit experience status and stack abilities. The interesting feature is the window presents not only “native” creature abilities but also the inherited ones (from hero, artifacts, and so on).
On the other hand the general look’n’feel of the new window… Well, I’d say that it still needs improvements, it doesn’t look as something finished. The settings.txt file has been extended with a new option, for deciding whether to use the new window or the classical one. During the game this option also can be switched by typing at any moment “switchCreWin” (case matters!).

There are also other, smaller new elements and many bugfixes.

Please correct me if there are any mistakes or missing information about changes.
Please check if package contains all needed files (1920x1080 resolution and creature window are elements that use new graphics).
Please also write, what issues/improvements you think should be (or would be very nice to be) fixed/added before release. I don’t have much time, so no promises, but I’ll at least carefully consider them.

Many thanks to all contributors!

Please correct me if there are any mistakes or missing information about changes.

Correction: There’s no such word as “splitted”. The correct word is just “split” and probably “split into” would be the best usage here.

Good work on the continuing VCMI project! I look forward to its (eventual) completion.

Are the enemy monster stacks supposed to be at max experience level? When you start from 0, and you don’t get the extra HP of the experienced troops as experience for your troops (basic HP is all you get I think), it’s kind of a disadvantage.

If any monster stacks join you, they join at full experience too.

Are extra abilities gained from experience functional yet?

Obviously, extra abilities should work - assuming they work at all. No new WoG-specific abilities have been added, apart from protection / receptive. Item implementation sheet is still valid.

Two 0.84b issues reported on Mantis.

Steven Aus ->
Crash is apparently caused by the +5 growth week events. Has it happened at any other circumstances than ending turn on 7th day of week? I so, please open a new report.

The second issue is strange. Can it be reproduced using a savegame?

It doesn’t happen at the same point repeatedly, but I would say it happens about every 10 days of game time. It has happened when setting a path on the adventure map, or trying to build certain buildings in town screen, or maybe even sometimes when not building anything (perhaps using town marketplace?).

Is there going to be another dev build soon?

I’m asking because I am not even able to start the application. I’m getting the below error, but I wouldn’t want to create a redundant report if it’s fixed already. 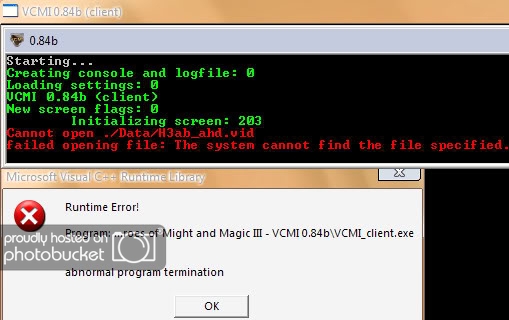 from now on you need to have H3ab_ahd.vid file in your Data folder (it’s a new dependency introduced in this version).

Hmm… Actually one does not even need to be a coder to read that console message, so it’s a bit embarrassing I didn’t figure it out myself.

Somehow I didn’t expect it to be a missing file issue. I was sure I had a full version of H3C installed to begin with, but it seems I was wrong (unless H3C does not give that file, in which case we may have to put a warning with the next release…?)

Actually that file is present in my H3C (gog.com version) data folder… I wonder how many people will be affected by this issue.

Can we replace crashes with just some warning message, advising the player certain game features (e.g.: videos, music) will not work if files X or Y are missing from the game files?