Hi, i saw many plans about adding scripting language like LUA or python, but none of them sadly seems to be realized. I had some idea`s about devloping python api for VCMI. Something like GemRB does, maybe not with ushc powerful control. For start i was thinking about exporting methods from CGameCallback to be scriptable in python 3. What do you think about it. Should scripts be executed on clientside or on server side? Are there any concept design documents about scripting language?

Should scripts be executed on clientside or on server side?

Depending on purpose of such script I guess. Usually - on server but GUI scripts should obviously be client-side:

Are there any concept design documents about scripting language?

I don’t think so. So far no-one from our devs have shown interest in actually implementing this feature. We do have ERM parser/interpreter but actual script-game interaction was not implemented (this was university project of Tow).

What do you think about it.

If you think you can handle this - then go ahead.

boost::python was exactly of i was thinking with some addition of static module methods should do the trick. I`ll try to create some prototype of scriptable maps with OO access to game callback. How do you see integrating script with map? Writing python code inside events like it is for ERM or completely separate file in format {MAPNAME}.py? We can discuss details on private

For map scripts separate file is probably a better idea - right now plans for “VCMI map format” is to have .zip archive with several text/json files in it. So map script can be represented as separate file in such archive.

For now since we don’t have own map format I guess we should look for script in maps/.py as you suggested.

As for scripting API - callback is well, callback. Implementing python interface for it should be straightforward. But to use those script must be activated in one way or another (like via triggers). How are you going to implement them? Track received/sent network packages?

We can discuss details on private

No need to hide this - most (if not all) of our discussions are public so let’s keep it that way. Besides - I’m not the only developer here.

There are singinifact troubles concernning safety, synchronization, GUI and assymetric access between Client and Server. Tow explained some years ago why adding scripts is not a simple task and since then probably not much changed.

I agree, however, that adding simple scripts to support well-defined adventure map objects is resonable aim. They contain no interactive GUI and generate no further events, as for now.

Better to have barely useful Python API which waits for better days than to have none at all.

For now ill try to create scriptable extension of CGObjectInstance which will have scriptable its virtual methods. I guess with some twists its possible to call python implemented virtual functions seamlessly to game engine.

OK, sounds good. Although I suggest looking into IObjectInterface methods first - these are core methods needed for an object (including static callback field through which object may access game state). CGObjectInstance API needs cleanup - some fields that can be made virtual are not marked as such while some fields that should be internal are marked as virtual. Will fix this soon.

Another issue is that for anything related to granting creatures or fighting guards you need to use CArmedInstance. So it is a good idea to use it as base for “moddable object”. So inheritance should be like this:

We have more interfaces (f.e. IMarket) that may be needed by scripts.
Should we:

Fun thing that I also have been thinking about that. In my case set of “interfaces” as of now consists of market, shipyard and army/creature set. Although “object modules” is probably a better term for them. Something similar to interface querying I guess.

After that I noticed how our shipyard works - it derives from IObject but receives CGObject in constructor so it has access to CGObject without directly deriving from it. Perhaps there is some way to use such approach on bigger scale?

Each of such modules is stored as part of CGObject or IObject with method like tryGetInterface() to query for presence of specific interface. In the same time each module have access to its parent object (and all calls like onHeroVisit are transferred by parent to modules).

Next? Adding new modules by scripts. It should be discussed early as it influence querying mechanism (at least static polymorphism - templates - will not be possible)

UPD. This is similar concept to new spell system which I`m designing (spell itself - SCpell - and spell mechanics are different entities)

For scriptable modules we can (at least at first) just provide them with common interface (like onHeroVisit() method) and be done with it - so this should be easy part.

But there are more than enough questions even without scripts:

Probably better to split this discussion into separate thread.

How do you think should be new scriptable objects added? I started to implement it this way. The event on map contains in its message identifier like Python:ClassName and it identifies that in file {mapname.py} is its definition. I know itsnot elegant way to intercept the events, if you have better suggestions which will be easier to maintain in future, feel free to share. I see there is a comment about possible extension when creating TreasureChest object so maybe thats the spot.

For now we should stick with with new objects as opposed to editing/rewriting existing objects. And by new I mean object with its own type/subtype values.

To do this in a proper way you need:

(This is ugly workaround since map objects refactoring is still not 100% finished. Later this won’t be needed)

Now start “New objects test Arrogance” map and you should have your object next to starting town (they use graphics from H3 subterranean gates)
(Actually there are 5 different objects, their type/subtype is written on nearby signs)

If something in our code does not works as expected or you run into some issues - upload you code to github so I can take a look on what’s going on here.

UPD: and make sure to register new file extension (".py") in EResTypeHelper::getTypeFromExtension method. Othervice VCMI will ignore such files during loading

Thanks, i managed already to register file type and invoke some arbitral scripts, but what you just showed is exactly what i need.

Small update from my side - fixes for H3M loader as well as CGObjectInstance API cleanup are now in github repo.

So you no longer need that H3M loader hack for new objects and CGObjectInstance API is back into stable state.

I managed to do some prototype, and here is what i got. With script like this:

You can view the effect on attached files. Nothing fancy, but from now it`s just matter of exposing different functions and classes, which will require some automation, to keep up with C API changes. I will loon on tools like Py++ or pygccxml. Also for python is better to keep callback as part of VCMI module than to hook to static fileds of IGameCallback but it is all to be discussed. 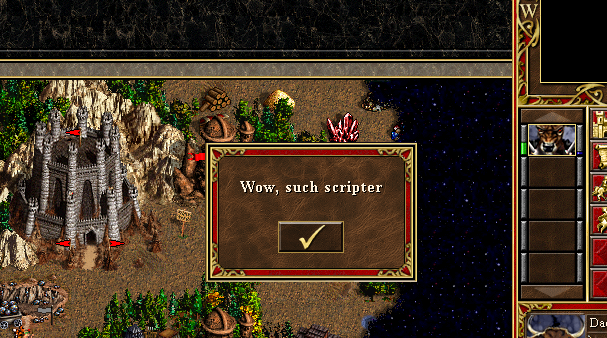 Report from work in progress.

I listen to every ide how to improve this and what features will be useful. And if somedy know better tools to parse classes let me know. I already know pygcxml and Py++ but i cant get them to work.

Oh now, python!! Kill me!
PS Just joking. Will have to learn more about Python…

Will take a closer look on all of this tomorrow.

Other types of scripts (e.g. GUI script) may have other means to access gamestate so exposing callback to all scripts may not be a good idea.

That would be cool, probably can be implemented as a “cheat code” that toggles python console on and sends all input to server for execution.