Hi everybody! As somebody might know I work on my own branch of AI for about 2 years. So I want to start some alpha preview. If somebody is interested to try it out and give some feedback you are welcome.

This AI is not safe compatible with original VCAI for now.

You may want to provide direct link. First of all, people won’t see much at all until they log in with Github account or similiar.

Secondly, I can’t find a downloadable either way… this is what I see:

You are absolutely right. Direct link will work better. Here it is https://ci.appveyor.com/project/vcmi/vcmi/builds/32794217/job/r0wviybpcchh3e04/artifacts
And it does not look like requiring any login

The source code is in the nullkillerAI branch? can it run in Android if I use this branch in vcmi-android?

I’ve player whole evening with this branch. AI turns took sooooo long so I’ve only watched ai moves, not tried to battle them.

Regarding resources it is a bit reactive. It will start gathering resources when it understands it needs them. Sometimes it flags ore/wood mines in the first turn, sometimes not.
Performance optimization is possible also. I plan to do some parallel calculations. Also pathfinding eats more resources now because of hero chain.

@misiokles have you used a map with mods? Of what size? I have not tested it on big maps yet.

@kdmcser pushed a few fixes for Android. Now it should be more or less stable.

Got Travis build green. So daily builds for my branch are available here https://builds.vcmi.download/branch/nullkiller_ai/Windows/

Hi，my andriod compilation runs well in menu interface, but abort when a new game start. Maybe one of the mods lead to it. But I dont know how to collect the log. Any suggestion about it?

Yes I have one. Have you run python update_internal_assets.py?

Okay so today I played casually on the “Vial of Life” default scenario on your branch on “easy” level. I played the same scenario last week on develop, so I think I had a pretty good comparison.
So here is my review:
Great Job! Finally VCMI is fun to play even with AI opponents. The AI was exploring the map, developing the towns, engaging in fights when it made sense etc. Of course there are some quirks, but it’s really a huge step forward.

I noticed a couple of quirks you might want to know, but please don’t feel discouraged by them. The AI branch is really a huge step forward.

It is not exploring map now, it just executes vcmieagles for itself on the first day and see everything. Later I might consider exploration but for now it is quite a complex question which I decided to postpone.
Regarding bugs and strange behavior please provide map/save/logs, it helps very much to understand the problem. Otherwise it is hard to tell what is going on. At least save file give a lot of information if I will be able to reproduce the problem.

@Czesiek it would be great if you finish your retreat and surrender logic. I will integrate it to my branch. But no rush. I have a lot other things to do.

I’ve noticed that when AI attacks and wins the battle, game freezes for longer while and beaten defs vanish very sloooooowly…

Probably AI code lacks thread interruption points to give time for UI to render. VCAI has a few and probably I have to add them also. Will add this to my todo list 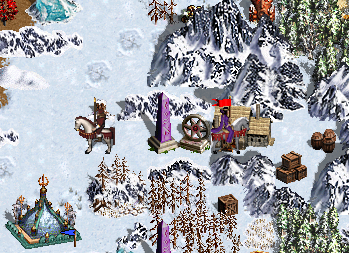 In VCMI random maps sometimes objects are behind other visitable objects. In this example - to visit War Machine Factory, hero must first visit Obelisk, then Star Axis.
AI heroes often get stuck in such situations. They can visit those three objects, but they can’t go back, because (I guess) they treat once-visitable objects are ‘visited’ so they aren’t interested with way back…