It crashed because I deleted the “power” value at root. I’ll need your crash-log for the original file from the v0.2 release (you can download it below).

Ok, I’ve found the cause.
This line: "id": "refugeetown:rfgGoldGolem", - it means that main folder of your mod must have name refugeetown. But you’ve packed your mod tht after unpacking there’s no refugeetown folder by default.

@misiokles Good job for finding the issue, thanks! I will create a new repack right now !

@misiokles Yeah you’re probably right, I will change the amount of starting units. I put less lvl 1 units because they are upgraded lvl1 instead of normal but I guess I will remove peasants from the town and replace them with a new variation of rogues. I will create an alternate version of rogue tonight.

Right now I’ll follow your advice about the advAmount and then I will edits map models for units. Thanks for your help !

Edit: For some reasons I can’t use the “What’s this?” function in my H3 editor. It shows this error message and do none. 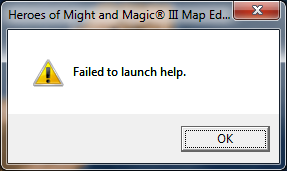 what about this whirlwind for your city if I can suggest

@planetavril1 It reminds me of the BlackHole grail prototype. You suggest it to replace which building? Any chance of it having more frames ? (if the animation is too slow it won’t fit well in-game)

For some reasons I can’t use the “What’s this?” function in my H3 editor. It shows this error message and do none.

Sorry, it’s work fine when you use HotA map editor…

@Yuya you can give castle sprites?

@misiokles Oh, sadly I don’t have HotA so I guess I will take values from another VCMI town’s mod and I will later replace the value with HotA creatures references (rogue, golems, enchanter, etc.).

@zerg You can download the Townscreen (v0.2) in .PSD file format here.

AVCftrc0.zip (28.3 KB)
I’ve found such def on my drive. Maybe it will be more needed than me

@zerg In case it could help

Hello everyone, In the actual version (v0.3, unreleased) I wanted to remove Peasants from the town and so I added a new creatures which is a Rogue’s variant (I also changed the skins of both LVL3Upg & LVL7/LVL7U units by the way). But I’m not completly sure about the actual roster and I’d like to hear from you guys what you think. Here’s below the evolution from v0.1 to v0.3 (ps: made this picture quickly so I didn’t saw that I inverted lvl6 basic/upgrade units): 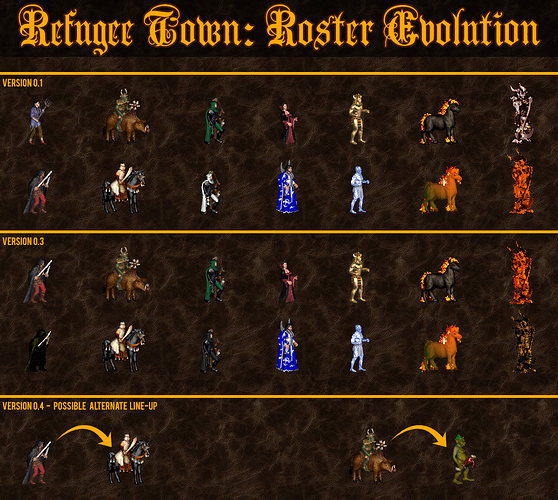 image.png1000×896 520 KB
Should I make Rogue upgrade into Nomad so Trolls can join the party? It would be more coherent than seeing Boars upgrade into Nomads. But in an other hand Trolls regeneration ability would be useless since it would be tier 2 its HP would be lowered. What do you think?

By the way, here’s some progress I did for the upcoming release (see below). I created the puzzle and siege visuals and right now I’m still working on a new version of the townscreen. I want it to have more color harmony. You can see the very early version of the townscreen’s edits. There’s more stuff added in the upcoming releases but I’ll talk about them when I will release the v0.4.

Yeah, removing Peasants and adding Rogue variant is good idea. But not neccesarilly dark variant. Tier6 i tier7 is dark and it’s enough. “Reffugee” is hardly ‘dark’, I think. Good defs of recoloured Rogues and Sharptroopers you can find in Mythology mod for Heroes3 (https://drive.google.com/file/d/1jskJOGafmHn000EJ57fodWyaUr4GyVF_/view?fbclid=IwAR0bGYLl-3a_UyhyttE2zltXB5aWuRS0nrDkkzZNVNZvbp5Y0Um8TJFVLqM).

Should I make Rogue upgrade into Nomad so Trolls can join the party?

Not really. But you can consider to make some alternative upgrades, like in Tides of War mod.
About Trolls - I don’k know. They don’t fit to your line-up.

I remember seeing mythology’s teleporting blue rogue and red nomad and they looked good and will fits perfectly in the town so I guess I will remove Boar from the town and add a Nomad variant. I will focus on the roster right now and try to improve it. Thank you for helping me.

About Sharpshooter I will go with a red variant to fit the new Heroes battle visual I made (see below) so I can achieve to get a more balanced colors. I will probably edit the visuals a little bit so I don’t feel like I’m just “stealing” the author’s works. 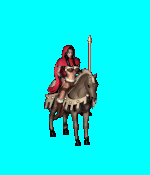