Hi everyone, today marks one week since I began learning VCMI modding and I wanted to share with you my 1-week progress. I used Cathedral Mod as a base and every creatures/heroes have been replaced and my town is fully playable. Though, I don’t know if it’s compatible with Cathedral mod but I changed most IDs so it should be okay.

You can find the download link below and I would really appreciate any reviews of that very-early version so that I could improve what I’ve done and what I could do next. To do list: Town screen, buildings stats (costs/effects) and the puzzle & siege segments.

Refugee is a new town that takes its inspiration from WoG’s Neutral Town. The common point of its creatures is their nonbelonging to the other factions. Thus, this castle sports concepts such as nomadism, motley armies and makeshift solutions. 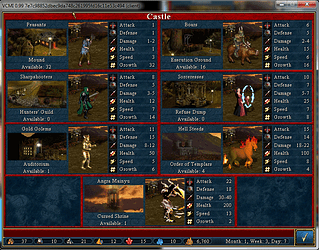 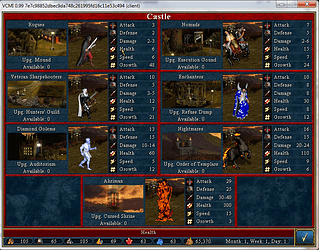 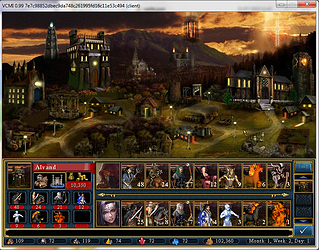 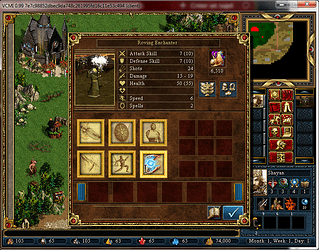 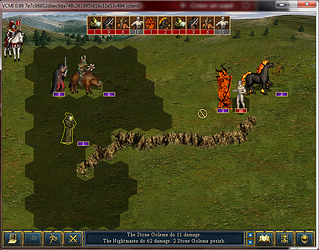 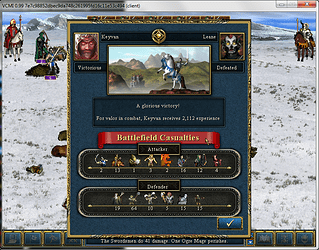 Option 2 is better,if you will do it I can help with the code

Thank you for your proposal! I’m actually working on the Town Screen design so we cannot work on its implementation in the mod yet but I might need your help for this section (suggestion/ideas on the designs right now) and on the implementation (defs importation & coding) when the designs are finished.

If you want to help me on the code right now, I’d really appreciate if you could handle the buildings costs (gold/ressources), the lock/unlock tree (which buildings must be built before being able to construct) and/or specific buildings.

I haven’t decided anything about those specific buildings (if I remember correctly there are 3 free slots) so if you work on that, you have the opportunity to decide what to implement in the mod. It could be a building that add extra gold each days, bonus to hero & garrison defending castle, or something else you could think of that you think would fit with this new faction.

Also, if you want to make some modifications of stuffs I already did, just tell me what you change so I make sure it fits with this faction’s concept. Every ideas are welcomed! Furthermore, when all of the above is finished, we could work on adding new spells for heroes & creatures to make this faction even more unique and consistent with the original ones.

here is an example of my robot https://www.youtube.com/watch?v=3GWoIUqF8rk&list=PLh1T9zKeinnCKOHP4H5DclBnY05mGzx79&index=2&t=0s

the essence of the city in a unit of neutrals or is there a general idea?

@Macron1 Yeah I forgot that you could use PNGs like you told me on the HeroesCommunity’s forum. Do you know where I could find any documentation of how to implement those visuals in the mod? I’ve downloaded every GrayFace’s tools but I do not know which one I’ll need to do that.

@zerg That town looks nice, I didn’t knew about this one! I’d say that the Town’s concept was initially based on neutral units & the “refugee” map objects we could find. But then I thought about adding more conceptual elements such as:

Here’s example of town mod which uses png files instead of defs.
http://heroescommunity.com/viewthread.php3?TID=35319&PID=1483109#focus
Mod is for VCMI 0.97 and can be non-playable under 0.99+ versions but schemas remain the same.

Is there any screenshots or video presentation of this mod available somewhere?

Oh, this version should be playable under daily builds: https://h3vcmi.slack.com/files/U4ZASNDA7/FJTUDDVQQ/necro-mod.rar

I played a while with your town. It has lots of minor bugs (missing commas in heroes jsons). Quick thoughts.

@misiokles The buildings costs are Cathedral’s mod vanilla values (I didn’t changed anything yet), but I remember having the same issue with mercury. If nobody’s interested in working on the building costs then I might do it soon.

About balancing, most of the town’s units are GROUND/MELEE and are kind of slow so that’s why I decided to add abilities to few creatures but yeah, that might’ve been too much lol. Some creatures are from WoG and I just kept their abilities while changing their stats but I didn’t thought of modifying abilities. Here’s a list of the units and their abilities:

Then we could remove some abilities that might be “too much”:

@zerg Are you familiar with H3 sprites creation? Is there a way you could work on a new upgrade for Nomads and/or rogues? I’m not entirely satisfied with the actual units roster of the town and if we could replace peasants & boars that would be cool!

I’m busy a bit with this right now

if you need these files tell i will give

I really like your idea of having a gold/diamond-colored tubes for the dwelling to fits with the town’s creatures. There are few errors that will need to be fixed (as seen below) but it still looks way better than what I did !

image.jpg1235×274 150 KB
The next step after completing the town screen would be to work on adding some animations to it. The Tower’s Golem Factory has animations sprites that we could reuse. Is there a way you could also work on this?

By the way, here is the last-to-date WIP town screen. The missing buildings are: Grail, Horde(1) and 3 Specials buildings. Also, I have made the ressources costs and unlocking tree and it’s already implemented in the mod.

easier to redo the def that is used in the cityDef.7z (56.2 KB)
i can make any of them as you need