After a many years there is a new major release ready.

We’re happy to announce a new release! Several years have passed since VCMI 0.99 and it’s about time for a new release. Tons of changes, improvements, and fixes have been introduced during that time, so it’s hard to recall all of them. However, we’d...

Not quite the same. Since this release “VCMI essential files” only contain assets created for VCMI project itself. So it’s files we have copyright on and can legally distribute.

“VCMI extras” is a mod containing map templates and high resolution support graphics. They both are are derivatives of Heroes 3 assets and dont have clean licensing. Like with any mods this is gray area so we don’t include them in release builds. 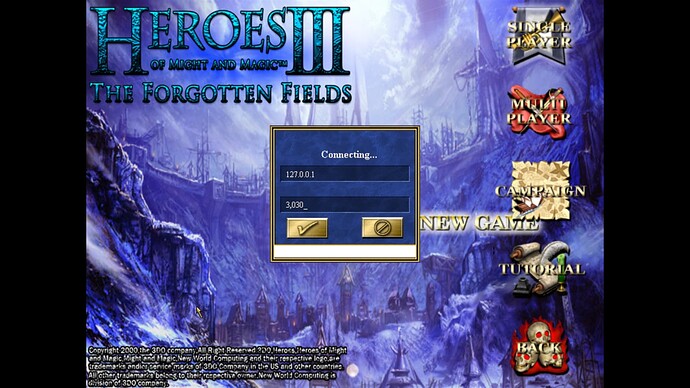 Help with what? This window should dissapear after few seconds.

Check if VCMI Server / Client is blocked by firewall.

That’s amazing to find version 1.0. Now I suppose the game is more stable. I have already tried for several hours with VCAI. It is not a big change because AI recruit less troops, and it is hard for them to know when it is the suitable time to recruit creatures.

From my view, AI still needs to be improved in recruiting creatures, I think every turn is suitable for them, because they are weak in defense of the town. It is easier to make it recruit every turn rather than improve the AI function to find the demands.

When will this version be available in Ubuntu repositories?

I saw that both Flatpak and Snapcraft have this in their stores.
But it is still on the last version.
Has anybody reach out and asked them if they will update it to this version?

This is great news. VCMI is probably ultimate answer to improving Heroes of Might and Magic III where it was somewhat left off. It will be a pleasure to play this great game again on Linux PC and Tablet. It’s time to go and conquer some castles!

Hi, is Linux still supported? It seems that no new builds for linux are available for some time already.

it is supported, but currently we don’t have an active linux dev who is able to create appimage and similar packages

Hmmm, i am using linux. And i compile vcmi myself. But i don’t know how to make an installable packet. I would be interested to learn this though. I am a little short of time for now, but i will stop working at february next year (retire), and then i hope i have more time for vcmi in general. So if anyone has some good resources (links) on how to build packages…

I can probably build it since I still have stable 1.0.0 sources downloaded and compiled but I don’t want to sign any pact of doing it on regular basis. I can do one time 1.0.0 as soon as I set up my tools.

if it’s a simple automatable thing, you could just create script that would be run as a part of our release pipeline
FYI respective issue: Fixing linux builds for upcoming release · Issue #802 · vcmi/vcmi · GitHub

Ah no, that’s not the problem to make it automatic for future and such. It’s just that in case I would forget to package it and upload I don’t want to be chased by necromancer’s armies

That’s why I will try to build 1.0.0 as it’s a big step and good point for many to “just play” the game without worrying of updating every three days or so. I will try to make flatpak and/or appimage since rpm/deb could probably make it more crazy than it’s worth (especially deb).

EDIT #1 - I’m making some fast progress with flatpak one, some more trial and error and maybe it will be ready within a relative “soon” depending how it will go. One error at a time.

I would probably try to make .deb, since i’m using ubuntu. There is an issue with compiling the sources though: It needs at least one outdated library. I don’t remember which one, may be when i have some more time i can check that. But it was necessary to manually install these old lib versions. It would be better if that would be fixed in the sources.

Yes, i would automate that, as soon as i know how to build .deb packages. How is it uploaded? FTP? GIT? Is that automatable too?

you can try using cpack: CPack DEB Generator — CMake 3.25.0-rc2 Documentation
I have no idea how linux soft is distributed in general, but we can simply attach generated deb to GitHub release.

P.S. I managed to compile VCMI on Debian 10 using dependencies from Conan without any issues.