Forum and bugtracker have been moved to a new server. Now we’ll have more space and possibilities for further site development.
Everything is now hosted under domain vcmi.eu.

Please update entries in your bookmarks

Old links will remain functional for some time and redirect to the new domain.

I’ve updated links in the forum with new address, so internal linkage remains consistent.
If you encounter any problems with forum that might be related to that migration, please report them here.

Is this possible to add VCMI icon to new forum address, cause if I have few icon shortcuts in Opera on address bar I don’t know which one is VCMI

Is it working fine for you?

This may be a browser problem but VCMI icon does not have transparency( I have white area instead)
Opera 10.10

Yes, I have same situation in Opera and on my Desktop. I wrote about it before. I have it on both my laptops private and company. 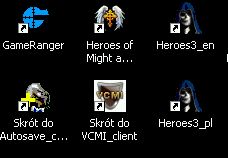 First, congratulations on the move to the new server. The new address is more elegant, ‘international’

and shorter (easy to remember). It’s a sign we are growing to a very serious project, with a dedicated domain and everything.

Now, about the issues with the icons (to be expected in the first days after such a move):

This may be a browser problem but VCMI icon does not have transparency( I have white area instead)
Opera 10.10

I don’t have that problem in Chrome (v4.0.288.1), nor the issue with the desktop shortcut reported by Boulie (I have WinXP.SP2).

For me, in the Chronicles layout, only the WinXP icon seems to lack transparency (though I see it with black background i/o white). And that only for the posts before the move to the new server.

If I switch to subSilver however, almost all buttons and icons fail to load correctly:

Another issue is on the Statistics page. The OS & Browser icons section receive doubled icons for the OS/Browsers used on the new server. I don’t know if we can merge them with the old ones, or perhaps the old stats should be just deleted in that section. If neither of the two is possible, perhaps we can find newer, more stylised versions of the duped icons, to use for the stats on the new server. And if you’ll work on those icons, perhaps you can also add the Safari one. See my post here (the SRWare Icon is not so important, though if not added, the members using Iron should be identified as Chrome users i/o Mozilla).

I’ve corrected the address in most places (I don’t know how to change the text in Support tab).

Not sure if these two are related, but since at least a week I get 404 error everytime I try to reach the board or bugtracker from my laptop (tried different networks).

Hmm… I check up on the forum almost everyday and haven’t got a 404.

Warmonger, are you sure that you use up-to-date links at your laptop?
Our old server is down due to bandwidth limit (unexpected attack of yahoo crawler bot… that’s why we’ve moved). That’s actually an error 509, not 404 but otherwise fits.

FYI - I also never get the 404 error (or any other for the matter), so it must be an issue on your local machine (probably the links as mentioned above)

However I do have a problem with the attachments lately. And I believe it’s since the move to the new server I always get this message: “Sorry, but the maximum filesize for all Attachments is reached…”. As the message says, it seems to be a problem of the forum in general, unrelated to my profile (there it says I’ve used only 6% of my attachment volume anyway). Was this perhaps intended, so that we use Mantis as much as possible, or is it just a space issue on the new server?

Warmonger, are you sure that you use up-to-date links at your laptop?
Our old server is down due to bandwidth limit (unexpected attack of yahoo crawler bot… that’s why we’ve moved). That’s actually an error 509, not 404 but otherwise fits.