Is it normal for spell points to go negative? I checked if any artefact could have done it but nothing obvious there. Magic Arrow shows -2 and Haste -1. And they cannot be cast, it says something like “recites the incantation but they seem to have no effect”. Is this normal or a bug?

Normally, spell points can’t be negative. But it is possible to get such values using some combined mods.

I see. Well, after some VCMI update and some level up some of them worked just once. As in in the same battle I could cast Slow for 0 spell points and next round it went to -1. Is there an “easy” way to fix it?

Oki, So I have “In the wake of gods” without the Russian, Extra resolutions, high-res menu, creature bonus icons, New Terrains and Default templates. If I have to think about it I started to have the issue after adding the default template. But the error I noticed happened on a regular map, not generated.

Could you upload save?

warmonger.save.tgz (1.7 MB)
Ok, I uploaded the save. There are 2 files with about same size … I don’t know why. You can start a battle right away.

Finally, I’ve found the cause! 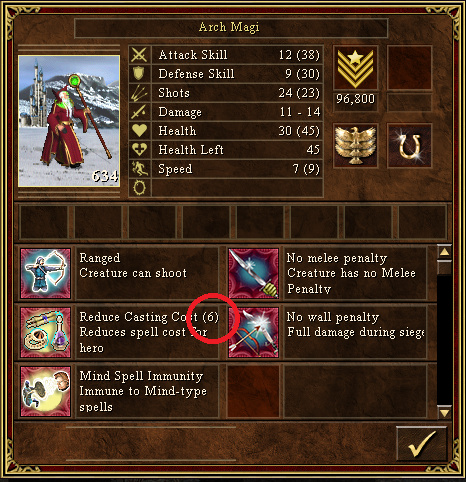 Wow, that is both awesome and annoying :)) I could try to modify the source myself, but I use pre-packaged PPA and I’d be more successful with C than C++. Not to mention I’m clueless about certain aspects of coding or versioning …Thank you very much for your effort!!!

If you want to be one of the contributors, please join slack https://slack.vcmi.eu/ and talk with developers. They’ll tell you everything about this projects and making commits!

Well, I’m not really that kind of person, I can do small simple apps based on stdlib (C only) or short perl scripts but I really don’t have skills for actual coding. Sometimes I may be just good enough to find a part of the code that generates and error and insert some if statement there. Much less likely with OOP…

You do not need big skills to work on VCMI, also I am happy to help any new contributors. If you wanna be better at programming, improve your C++ skills then it doesn’t hurt to try.