Finally my first version of program, which loads values from creature JSON (one creature must be in one separate file, and must not have syntax errors reported by VCMI) and then calculates AI/Fight values and writes them back to file (backup copy of source json is created with json_back extension.

Program just replaces some first found substrings, not
working with JSON format.
So needed values (“attack”,“defense”,“damage”, etc)
must each be on one
line in file.

WARNING!
Program now only uses attack, defense, hit points and
damage (min/max)
vaues to calculate AI/Fight Value.
In future some bonus in % to AI/Fight Values is through.
when some
abilities is available.

Currently program doesn’t know anything about JSON, it only loads first mention of parameters (like “attack”, “defence”, “hitPoints” etc) and replaces then first mention of “aiValue”/“fightValue”).

Program is written in Borland C++ Builder 5 (my previous program is written about 1-2 years ago, so I used things I remembered from past, don’t expect superb code).
Formulas were given by GrayFace from Wog Forum (wforum.heroes35.net/).
I plan to improve it someday).

Do those values have anything to do with the messages? Because when I played the sw knight mod, it said that lots of peasants were very strong or something like that, and I had quite an army.

Do those values have anything to do with the messages? Because when I played the sw knight mod, it said that lots of peasants were very strong or something like that, and I had quite an army.

Yes, you are right. This program corrects AI/Fight Values for monsters. Copy jsons of creatures to temporary folder and run this program on all of them to correct issue.

This is my improved version, based on AI/FIGHT VALUE CALCULATOR from first post in this theme.
Now AI/Fight Value is calculated with creature abilities accounting.
For example, TWO_HEX_ATTACK_BREATH is accounted as Max Damage doubled etc.
Other non-direct damage abilities are accounted by some % bonus to final AI/Fight values.

If “Balance creatures abilities” check box is checked, program will also correct attack, damage, defence, hit points and map quantity of creatures lev. 1-7 based on standard creatures boundaries of these parameters. So your parameters will not make your faction too strong.

PS Program is not working 100%, so in some cases after it’s work creatures JSONs must be corrected manually for syntax errors to disappear.

So backup your creatures JSONs before using this program on them.
Macron1_Balancer_V0.0.1.zip (39.7 KB)

Another small utility which was very-very helpful for me to correct a lot of issues.
Run this program, press Start button, and select JSON files of creatures (they must be located in your mod structure, for example, in folder “/config/-creatures/”
Program searches for values of “battle”,“map”,“iconsBig”,“iconsSmall” and checks, that these files are present in “/Sprites//” folders.

Now it works only, if values are on the same line as identifiers.

This helped me to figure out a dozens of wrong paths to map animation DEFs, missing missiles DEFs and icons.

PS In plans I have improving of this utility to check existence of sound files also.

PPS This works only with mods, where “Content” folder is not zipped. To use it with zip first unpack contents of “Content.zip” to /Content/

PPPS There were problems with adding attachments, now they are fixed, so I share this tool.
I think I will add later also checking of DEF/Graphics files for heroes JSONs, faction.json and structures.json. But now I don’t have time for this.
DEF Checker v 0.0.1.zip (18.5 KB)

As I wrote earlier, modding system allows to replace all 9 standard towns by new towns.
I think i’ll write some FAQ with files and examples later.
The thing is to turn off standard heroes and creatures by setting “special”:true to them.
Here you can download “ban-mod”, that sets all standard creatures and heroes as special.
Standart heroes will not appear in taverns and on map, if not directly set by map editor.
Creatures will not appear of map if also not set directly on map. Still they will be in standard banks (there is no modding for banks and dwellings yet).

PS This mod is for technical demonstration.
But I think it can be used to play map, where only few heroes set by map creator will fight. And their death will lead to defeat

I’d like to share PDN multi-layer file for Paint.NET, that I’m using to easily create puzzles for new factions.
It’s not classic, I tried only to make easy and quick way for puzzles, not bother with H3 puzzle style.

There are 32bit transparent PNGs that can be used to make town icons (they have border and checks on them). Create 2-layer file, on 1st layer place town icon, on second place one of these files.

Also there is multi-layer template (Paint.NET format) for creating town hall backgrounds.
It already has lot of hall icons variants on diff layers.
Remember, that it must be saved as 8-bit PNG file.
Now it’s only 8-bit graphics because of limitation of VCMI engine, so if you place picture of background on “background” layer, it can become corrupted in game.
I hope 32-bit support for town icons background is on it’s way.
UPG In 0.94b/c/d you can already use 32-bit Hall background, so you can add a layer with background picture under hall icons layer, and get nice looking hall background.
Standard Things.zip (1.07 MB)

So VCMI 0.94b is out. I corrected this migration script to convert buildings/faction/structures.jsons to new format and used it on VCMI towns until they converted without errors.
To convert town buildings place this script in one folder with buildings.json/structures.json/faction.json.
To run program without actual correction of initial files you must input command (this will be helpful to look to output of console and see if process had no mistakes):

To run program with changes of files you must input command:

I’ve tested it, and didn’t get errors on my files.

Perl script uses only regular expressions and works only with text, requires no special Perl modules. Script was tested on Debian and Windows 8.1.

PS If there will be more changes in VCMI modding system , I will correct script to fit new expectations…
VCMI095_Migrator_Script_v02.zip (2.71 KB)

PS If there will be more changes in VCMI modding system , I will correct script to fit new expectations…

There is a reason why we have wiki:
wiki.vcmi.eu/index.php?title=Modding_changelog
Complete list of changes since 0.94

This is pure Perl script I wrote to automate migration of creatures JSONs to 0.94b (0.95 actually).

It comments strings in “sound” section, that point to “” (no sound file).
Also it adds “idle”:1 to “animationTime” section.

Now this mod not only removes standart factions heroes and units from selection, but also removes all standard factions from selection on start!
You can comment in mod.json only those factions that you want to play with.

Now this will work only with maps, where no standard towns are placed in editor.
So if you want to play only with factions of your choice, you must find good map.
ban-mod.zip (8.49 KB)

Next version of Macron1 puzzle creation.
Now you need to install ImageMagick on your computer and then do things as described in readme.txt.
You must prepare 596x546 picture to be inserted as puzzle. Then it will be cutted to set of PUZxx.png files. You can quickly make 32-bit puzzles then

This program allows to change colors in DEF palette. You can load creature or map object def, and change one colors to anothers. After saving resulting DEF you will get recolored thing.
Now you have mechanism of automatic recoloring using previous recolors.

PS Program is written in Borland Builder C++ 5.0. Program was made quickly, so there is a ugly quickly written code (bydlokod

This program allows to change colors in DEF palette. You can load creature or map object def, and change one colors to anothers. After saving resulting DEF you will get recolored thing.
Now it has mechanism of automatic recoloring using previous recolors. But it needs to be impoved.
DEF Recoloring Program v.0.0.3.zip (124 KB)

Simple made replacements for standard roads:

I quickly made it and didn’t test it with many towns and heroes, so maybe background still needs corrections. 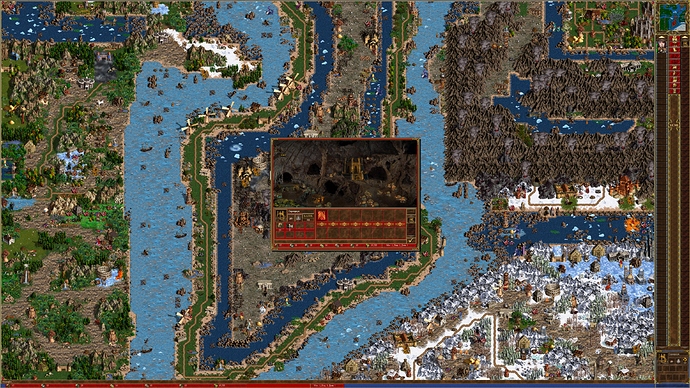 top arrow buttons are duplicated. Resources bar is a mess.

Other then that such big res seems unplayable. Town window is really to small for my taste. Takes away a lot from game feel .

Extract and place mod files to /Mods folder.
With help of MMArchive or other tools extract all DEF files from FREDOBJ.pac file to /Content/Sprites directory of Mod.
I didn’t included Fred79 assets due to avoid legal problems and screams about “stealing” from Russian community.

This set of Fred79 objects is incomplete and uses my own look at objects names/uses.

Enjoy if you can. There seems to be some bugs cause RMG sometimes crashes when generating maps.
fred79objects-mod.zip (133 KB)