I like it, but I only managed to move and attack with one creature yesterday when I saw this, and then nothing reacts.

I like it, but I only managed to move and attack with one creature yesterday when I saw this, and then nothing reacts.

Sorry, I didn’t really explained what to do.
Lordswm is an online game, which uses the combat elements of heroes V, and you can play it against other players, or against AI.

I am trying to do the same, but I want to make an online version of heroes III. I have already made the basic elements (attack, move, chat etc.).
You can play only against other players yet: **h3battle.tk/combat.php?id=1&userid=1 **
In the link userid=1 means that it opens the battle as the Red player, and userid=2 is the blue player. If you open these in two different browsers, you can see how it works.

The right side won, now you can just move around.

The right side won, now you can just move around.

Well, you can’t really do anything else now, I’ll implement a little demo later.

I killed your game, lol sry.

I tried to make an adventure map, where you can move around the map with your hero: 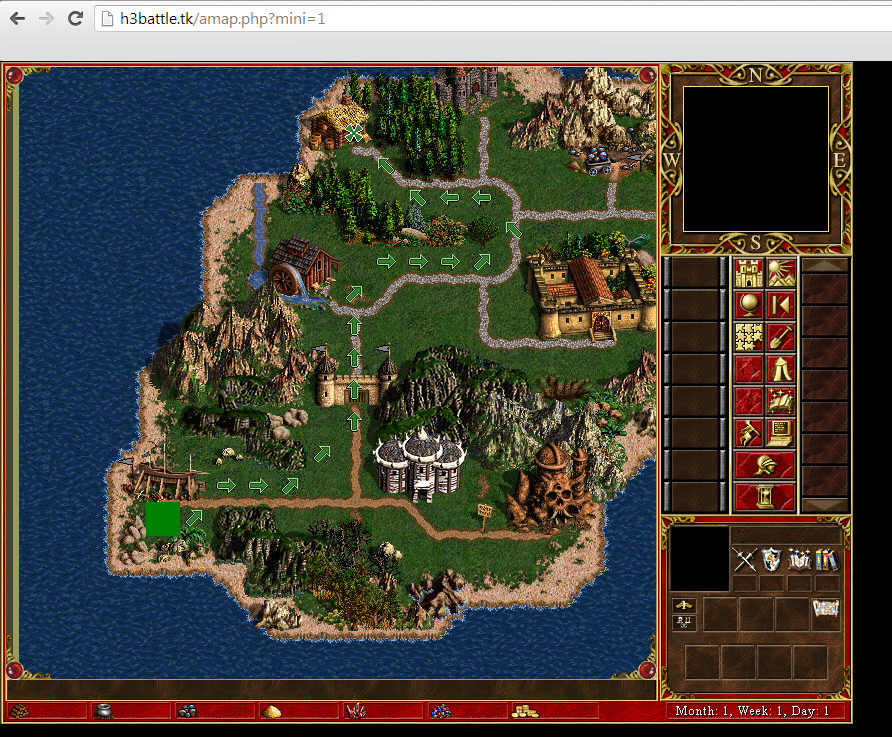 h3battle.tk/
Username: teszt Password: teszt
Unfortunately it is almost impossible to build the map from (grass,dirt…) tiles like the original game does (so I have to use the map’s printscreen from the editor), therefore exploring (the dark area) is also not possible.
But I think it’s pretty cool to have daily dungeons to complete, or a world map where you can see every player…

it doesn’t work for me, the map is empty. Do you plan that some day this would become much bigger? Just asking what are your intentions with this

Could you tell me what browser do you use?

I think a 2 or 3 times bigger map is possible, but it depends on the server resources…

I must also say that I like Heroes battles a lot and I would really like to be able to just go and fight, just like on your first site.

Good luck with your work!

I am planning to make a sandbox mode too, where you can create custom battles, and fight against AI. And you can share your battle, so you can compete with other players.

Amazing Demo!
I suggest you to use Canvas because it will be much easier to write tile engine with it. It wouldn’t be so hard to implement basic multiplayer(with ajax or better with websocket) and make this demo more playable.

There is a game called “heroesland”, but I suppose it’s in russian only. But the main site has english version, but news are not translated anyway. Here you can see some screenshots:
heroesland.com/media.php
as well as here:
forum.heroesland.com/viewtopic.php?f=4&t=6343
The idea is great ( with all these tournaments and some kind of clan wars) , but leveling takes too long and moreover you hero moves like a snail on the advanture map, so I just gave up