Can std: bad_alloc problem be solved?

This crash info was just caused by data allocation in C++ system(std::bad_alloc), I guess there is a compatibility problem(like 32/64 bits). I think this kind of problem can be solved only use a setting for allocation as Large Address.

There is a problem which is caused by memory leak.

Please mention it, while choosing the towns or heroes frequently, it must be crashed. It will also be shown in task manager.

Let’s see the task manager:
the first one is VCMI, when I choose towns frequently in town window.
And the second one is Heroes3 Forgotten Fields 0.35, my own mod(based on original H3 program), while I made the same operation. 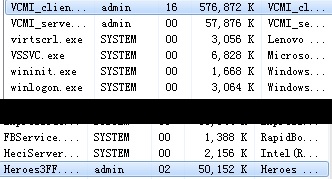 From this picture, we can see VCMI_cilent created a large figure, far more than H3FF in memory.

Thus it might lack some statements to execute the initialization after some operations. The stack will be occupied increasingly until the program crashes.

I suppose it can be fixed as soon as possible. Unfortunately, my Visual Studio 2015 are also crashed several weeks ago.

I suppose it can be fixed as soon as possible. Unfortunately, my Visual Studio 2015 are also crashed several weeks ago.

Is this still an issue with latest version? I wonder why you even had the problem week ago since i suppose problem with memory leak was fixed long ago:

changed 1 files with 2 additions and 0 deletions.

Was it just old version of the code or problem is still there when building with VS2015?