I suppose that traditional menu of Heroes 3 should be redone. It is quite strange actually, with unnecessary things at first sight and necessary things forgotten.
First, “Records” and “Credits” menu things are unneeded. This can be put to the corner with small icons, but usually noone gives a freak to it.
Second, Player needs whether single player stuff or multiplayer (to play hotseat) or load game, where everything is already configurated, just load and go. And then he needs options - its freaking strange that only way to setup options for game, for sound, for battle is to get to battle, to game. Why not setup everything at one place?
Third, everything else is quite traditional - single player is campaign, tutorial and scenario. I only added Duel mode to list - select faction, hero, setup level, buy units for certain sum and fight. Actually, quite good place to train AI. Or for fast hot seat… Multiplayer is about Duel and Scenario. That’s all.

Of course, this UI is outdated very much. So i consider, as all we need is graphics, then UI can be even made in Battle for Wesnoth style - native OS windows with some theme upgrade. And it’s quite obvious at large resolution screens, where UI is so small that requires glasses to watch this insect life. We need some scroll-down zoom-in for comfort play, I guess… And completely moddable inteface so it could be turn into something like H5 or H6 minimalism with only info required to play and grand map…

But not let’s talk of minimalism, if menu windows don’t use effectively their space. What if these were not windows but new fullscreen? So much space! 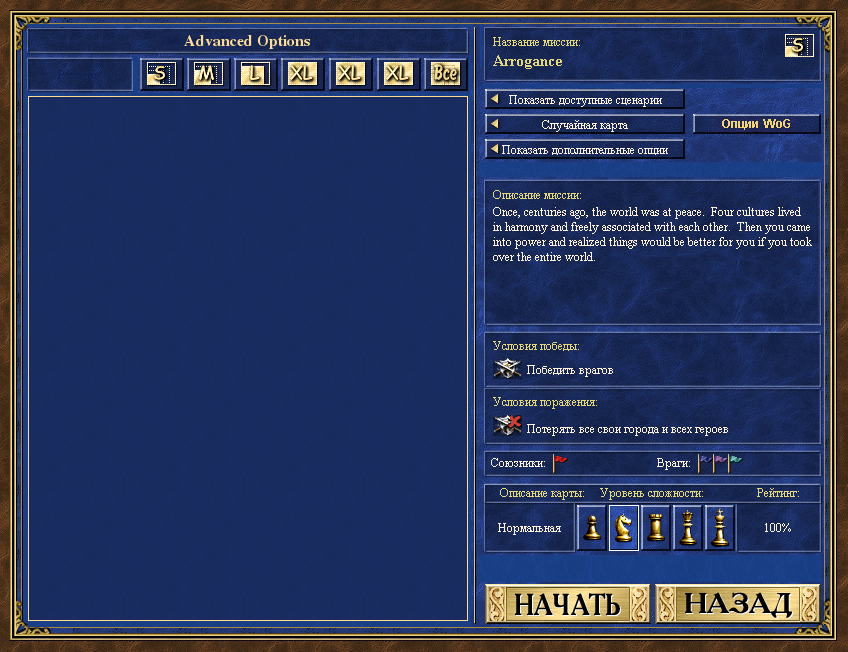 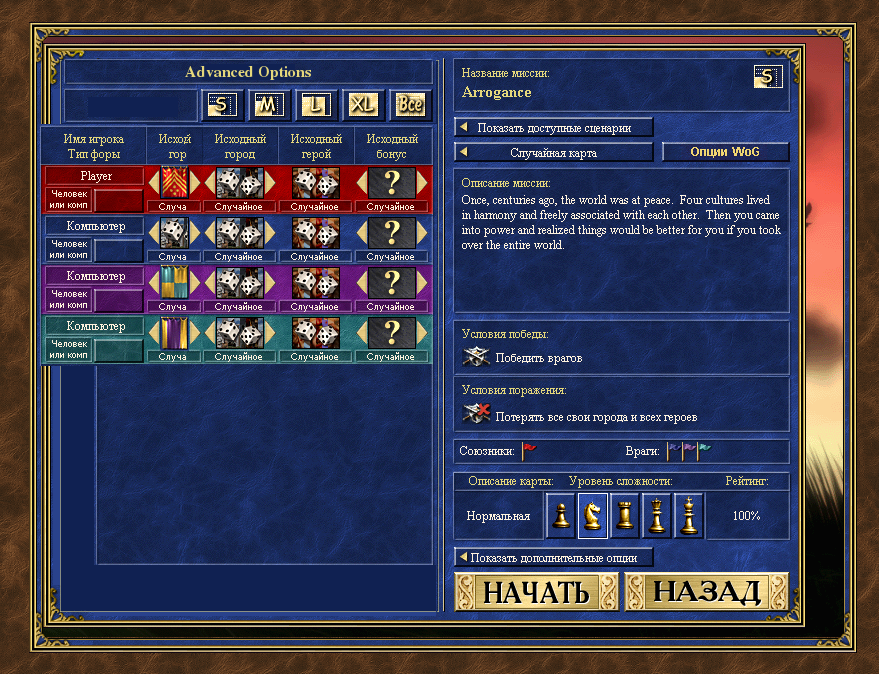 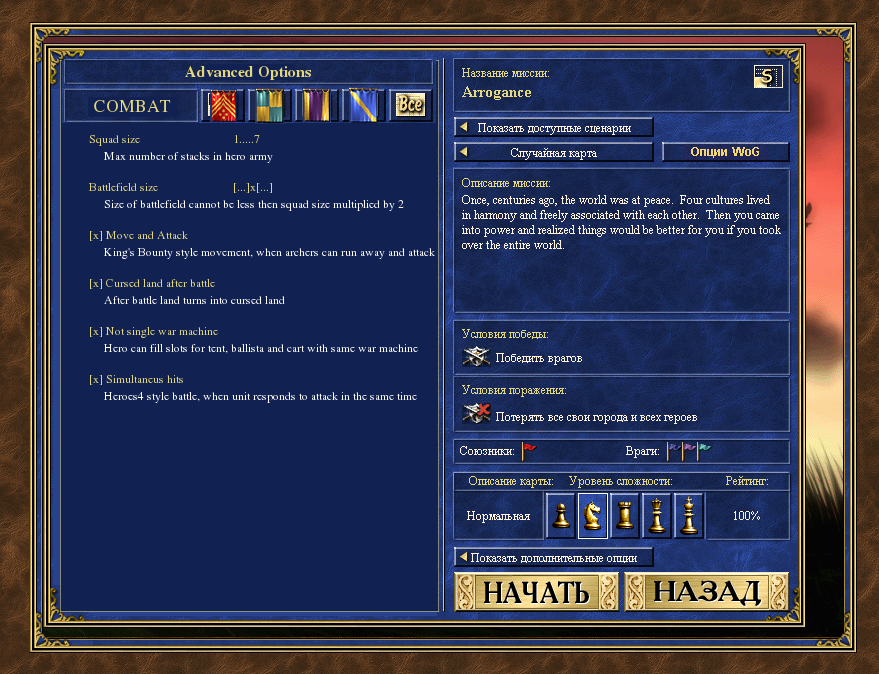 So another things, that are like mutators, and that I suppose to get to main pack of VCMI options.

Well, there could be little bit more rules, like removing certain skill, towns, spells or heroes from game, saving lists for future use. Or reverting back to H3/H4/H5/H6/H3Pro list options. Or else.
Heroes_improvements.txt (7.01 KB)

WoG options are in fact no longer needed, everything can be configured via Launcher.
The actual problem is to enable changes in running game. Current modding system doesn’t allow that, mods are all loaded and configured during launch.

And no, we don’t need even more ridiculous wogification scripts. They only confuse players. Certainly not as a part of core game.

The option for modifying number of allowed heroes was added in 0.96, though. Check configs.

He does have one interesting point - main menu.
Currently two out of five options are pretty much useless. Besides - it would be more logical to have single/multi switch in main menu instead of new game/load game.

Good point is that main menu UI is already configurable so this is something anyone can do if he wants to - check config/mainMenu.json IIRC.

I think these options can be made later by Python script support.

Or you can fork VCMI and make version with these options taking place:-) But i think forking will be reasoned only after API and modding format will be stable, and all features from HMM3 will be made.
Before it it will be too many work to implement features to every new build of VCMI.

I’ve decided to develop my idea of Main Menu change and I"ve made few pictures.

MAIN MENU
So, my idea was, that Main Menu should consist of:

Well, as main menu icons are made of skill icons this can be perfect solution for the menu translation to another languages: there was already thread where some talented guy was remaking HD HoMM3 icons. So these can be used for Main Menu: icon + text in golden over it with border black overdraw for both.

For Single Player menu I think of such structure:

OPTIONS
There are two options screens right now, one is System Options window, other is Combat Options window:
https://lh3.googleusercontent.com/iwNdFX42etT42uL_hFH2WIrUu_6vObCAivxtYrvJqrk=w1013-h512-no 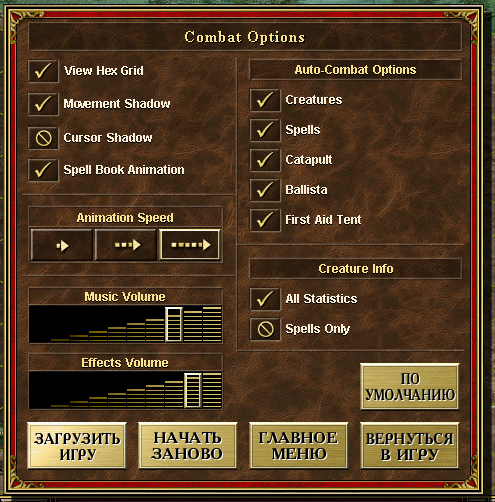 So, I suppose to join both windows in one, so all options are in one place:
https://lh5.googleusercontent.com/eE51R10QRgTcQIPXp0zOmE3W9lbhus7KmyjHNkzOWvg=w1024-h768-no
Or, a little bit another, more classic view, with place for more system options: 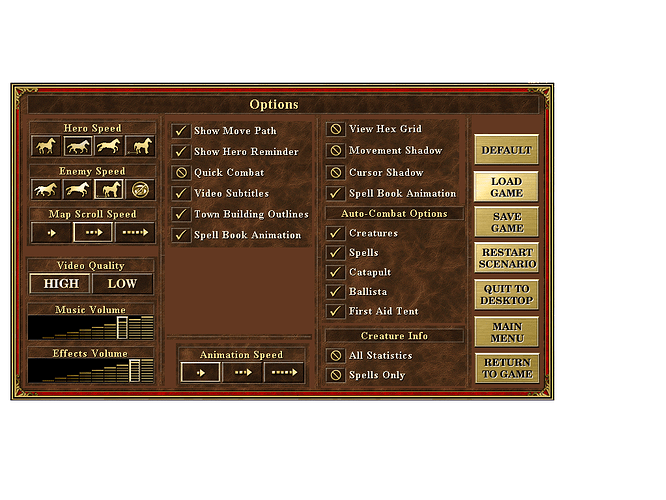 “Restart scenario” should simple “Restart”, so it both logical for global map and battle. “Save” button in combat is disabled.

On options menu - IMO using tabs to group options is always a good idea to avoid turning window into minesweeper.

Not sure if I like all those buttons - usually games have separate windows for main menu & settings.

Hmm, but these buttons are part of H3 UI… They are very convenient but yes, but getting more options can ruin initial design. So, to have more options, there is need for a new way to organize things. Like options button for options window and menu button for menu options - load, save, restart, to main menu, to desktop… Or “Options” option should be amond these menu options…